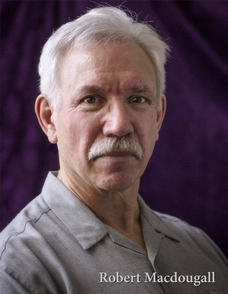 IN MEMORIAM of Robert "Mac" MacDougall

Robert Macdougall is an award winning Fight Director, Stunt Coordinator, Movement Teacher and Martial Arts Instructor, who's fight direction has been seen in theaters, and live stunt shows, on 5 continents. He worked as an actor, mime and clown, and toured nationally for several years, and has taught at movement and stage combat in professional theaters, colleges, universities, artist in schools programs, and professional actor training programs, in the United States, Europe, and Australia. He choreographed action, from large battles, to individual duels, on stage and screen, with Rapiers and Daggers, Bullwhips and Bowie Knifes, Broadswords and Battle Axes, and diverse other Western weapons, as well as various weapons from the Asian cultures of India, Thailand, Indonesia, China and Japan; and choreographed and directed action with firearms from modern automatic weapons to blackpowder.

He worked as a stuntman, and/or stunt coordinator on several feature films, TV programs, and commercials in both the US and Asia. He co-founded Proteus Theater Company, and Shakespeare Plus Companies, and founded "Sword and the Play" stage combat workshops, both in the US, and Europe. He holds teaching certificates, or senior rankings in several martial arts, and is a member of the council of elders of the International Amerindo Martial Arts Association (Pentjak Silat). As a martial arts instructor he has taught classes to the general pubic, at universities/colleges, and taught Knife, and Close Quarter Combat to members of various local and federal law enforcement agencies in the US and Asia, and to members of special operations groups of the US military. He advised and was consultant on action sequences in the video game "Call of Duty", for Activision, and for games still in development for WB Games, and for the graphic novel "Cimarronin", and choreographed action/fights for several music videos. He was a Feldenkrais Practitioner and teacher of QiGong, and Chen Style Taijiquan. He was a Fight Director and Certified Stage Combat Instructor with the Society of American Fight Directors, and Fight Director with the Society of Australian Fight Directors.