Remembering SAFD members who have passed on 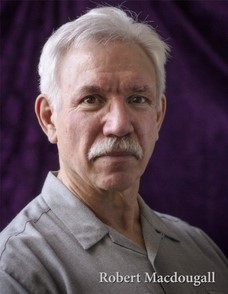 Award winning Fight Director, Stunt Coordinator, Movement Teacher and Martial Arts Instructor, whose fight direction has been seen in theaters, and live stunt shows, on 5 continents. He was worked as an actor, mime and clown, and toured nationally for several years, and has taught at movement and stage combat in professional theaters, colleges, universities, artist in schools programs, and professional actor training programs, in the United States, Europe, and Australia. "Mac" choreographed action, from large battles, to individual duels, on stage and screen, with Rapiers and Daggers, Bullwhips and Bowie Knifes, Broadswords and Battle Axes, and diverse other Western weapons, as well as various weapons from the Asian cultures of India, Thailand, Indonesia, China and Japan; and choreographed and directed action with firearms from modern automatic weapons to blackpowder. He worked as a stuntman, and/or stunt coordinator on several feature films, TV programs, and commercials in both the US and Asia. He co-founded Proteus Theater Company, and Shakespeare Plus Companies, and founded "Sword and the Play" stage combat workshops, both in the US, and Europe. He holds teaching certificates, or senior rankings in several martial arts, and is a member of the council of elders of the International Amerindo Martial Arts Association (Pentjak Silat).As a martial arts instructor he has taught classes to the general pubic, at universities/colleges, and taught Knife, and Close Quarter Combat to members of various local and federal law enforcement agencies in the US and Asia, and to members of special operations groups of the US military. He advised and was consultant on action sequences in the video game "Call of Duty", for Activision, and for games still in development for WB Games, and for the graphic novel "Cimarronin", and has choreographed action/fights for several music videos. Feldenkrais Practitioner and teacher of QiGong, and Chen Style Taijiquan. Fight Director and Certified Stage Combat Instructor with the Society of American Fight Directors, and Fight Director with the Society of Australian Fight Directors. His clan motto is Venceri Vel Mori.

The MAC, a workshop dedicated to honing and improving skills for Advanced Actor Combatants is named in his honor.

as remembered by FM Ian Rose

I met Todd in the summer of 1982 in NYC, he was Robin Hood at the New York Renaissance Festival and I was cast as Will Scarlett in the Robin Hood band. Now why the NY Ren Fair has Robin Hood in the Renaissance does prompt a question, but I was just happy that having recently moved to New York, that I actually had a job.

Todd and I bonded immediately. I quickly became Robin Hood’s right hand man that summer. And when the summer was over, that relationship continued. We became best of friends, then roommates.

Todd was born in 1950 and so was in High School when the activism in the 1960’s got going. He was in so many ways a child of the Sixties, a real wild child. Phrases like: “Fight the Power!” and “Stick it to the Man.” came readily to his lips. Todd, though raised in Maryland, came slinging steel out of the Pacific Northwest. He had been in a fight company there featuring: Chris Villa, Jerome Smith and J.R. Beardsly. These guys were the second generation in the SAFD after David Boushey, Erik Fredricksen and Allen Suddeth. I wanted to be them.

I was a kid from the Midwest with Swordstars in my eyes and I wanted to do it all, but I was frightened of overreaching my abilities. I wanted to stage my own fights! I had been allowed a little discrete choreography of my own in one of the fights that summer at the fair and I was anxious for more, but I was hesitant to jump out on my own. It was Todd who said: “Hey man,” (for Todd almost every sentence began with Hey, man.) We don’t have to wait for anyone’s permission to do this. Let’s just make this happen on our own.”

We formed a fight company, Knights of Illusion, and set off to win the NY fight scene. We ended up with some cool gigs; for Kronenbourg Beer, did a showcase and most prominently fighting on the bridge over the dance floor at Studio 54, where we also rehearsed. One of my fondest memories is performing our Case of Rapiers vs. Rapier & Cloak fight there. When we weren’t rehearsing there we were in Central Park fighting every weekend.

In our company, I took my first real steps as a choreographer and a teacher. I picked up habits from him I still use today as a fight director and instructor. I got to grow and get a chance to work on all the various weapons styles I had never been exposed to before. When I choreographed fights with Todd they just seemed to flow on their own.

Todd and I were essentially inseparable for over two years, I was the best man at his wedding. Which makes it especially sad that we had a sharp break. We quarreled over what seems stupid and petty now and under the guise of professional differences went our separate ways. A year or two later Todd and I got together and apologized and made it up, but we couldn’t work together after that. Todd changed his direction and went to LA.

I didn’t see Todd again until I was Assisting at the 2007 SAFD National Workshop in Vegas. He just showed up one day. After a few awkward words it was like we had never been apart. We both fell right into the same patterns. He stayed for a few days and we got to catch up, all our differences behind us, brothers of the sword again.

Todd was at the time in remission from a very nasty bout with cancer. But he had beat it, he thought. A year or so later it came back. I spoke with Todd in May when he made the decision to not go back to kimo. I argued with him but, Todd just would not have it, no kimo this time.

I spoke with Todd a couple of weeks ago and he was in as good a spirits as one could be, facing death like he was. I reminded him of a conversation he and I had when we first met about the hereafter. He said what if when we die we just are no more. I found this probably one of the most frightening notions I had ever heard of. I was horrified. I said: “Doesn’t that bother you? and he said: “No, thas cool, I can dig it. I think it would be great to have that kind of peace.” I couldn’t get over that idea. I found it, and still find it, pretty frightening. When we talked this summer Todd said: “Yeah, man that’s ok, I am cool with it.” Pretty brave fellow, my friend, Todd.