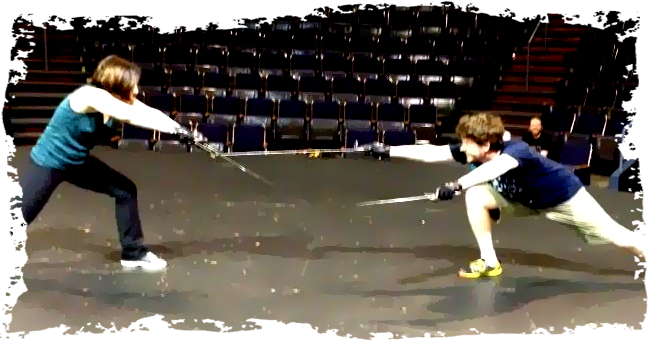 Advanced Actor Combatant Skills Proficiency is a specialized course for trained actor fighters that steps beyond the compulsory techniques required for the basic SPT and focuses on the dramatic application of stage combat.  Working with a small group of similarly experienced individuals, participants will study an assortment of advanced weapon styles and techniques, with scene work as an integral part of the training.

In addition to the core curriculum, the course may include (but is not limited to) classes in Movement (e.g. Alexander Technique, Feldenkrais), Shakespeare, Voice, Script Analysis, Stagecraft, and Film Fighting. Course completion will ensure not only a better understanding of stage violence, but also how it fits into the world of theatre. Students will emerge as stronger, more rounded theatre professionals.

The course is open to Actor/Combatants who are well versed in a wide variety of weapons styles used in film, television and live theatre, and offers Advanced Actor Fighters the opportunity to challenge and hone their skills at a highly sophisticated level. This is not a class about simply sword fighting; rather, it is actor training using the props of theatrical violence. Students will have the opportunity to renew their SAFD recognition in specific disciplines and test in additional weapon styles.

Students will be in class at least seven hours a day, six days a week.  Each day typically begins with an appropriate physical warm-up, followed by classes in two disciplines in the morning, two further disciplines each afternoon, and master classes and rehearsals in the evening. The long hours and intensity of this program require a considerable amount of discipline, commitment, flexibility and stamina from all participants. Swords, daggers and all other required theatrical weapons will be provided, in class, for each student.